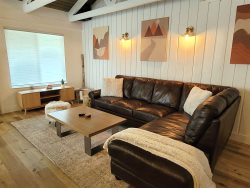 Mono Lake is a saline soda lake in Mono County, California, formed at least 760,000 years ago as a terminal lake in an endorheic basin. The lack of an outlet causes high levels of salts to accumulate in the lake. These salts also make the lake water alkaline. This desert lake has an unusually productive ecosystem based on brine shrimp that thrive in its waters, and provides critical habitat for two million annual migratory birds that feed on the shrimp and alkali flies. Historically, the native Kutzadika'a people ate the alkali flies' pupae, which live in the shallow waters around the edge of the lake. When the city of Los Angeles diverted water from the freshwater streams flowing into the lake, it lowered the lake level, which imperiled the migratory birds. The Mono Lake Committee formed in response and won a legal battle that forced Los Angeles to partially replenish the lake level.

Jump to a Rental