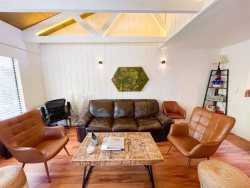 The Reds Meadow Valley is truly a special place.
As you top the Sierra Crest at Minaret Vista, views are revealed of the surrounding Ansel Adams Wilderness. The panorama includes the jagged peaks of the Minarets, Mount Ritter, and Banner Peak. Visitors have been returning to favorite places in this valley for generations to camp, to fish the Middle Fork of the San Joaquin River, and hike the surrounding trails. Places to explore include Agnew Meadows, Devils Postpile, Rainbow Falls, and Reds Meadow Resort and pack station.

One reason the valley has remained a special place is because of the shuttle system. The steep and narrow Reds Meadow Road would become a major traffic safety hazard during peak times of visitation without the shuttle. The reduction of traffic, pollution, noise, and parking congestion when people use the shuttle has allowed the valley to recover from the intense use it received in the 1970’s. Shuttle information can be found on the webpage for Eastern Sierra Transit Authority. Look for "Routes & Schedule" for Mammoth Lakes for information about the Reds Meadow Shuttle:   http://www.estransit.com/

Jump to a Rental